Posted on September 1, 2020 by billbushauthor

For August I didn’t give up the national news as much as moderated my intake. And compared to months prior to July, I listened to significantly less. I had a good balance in August of paying attention to the news and maintaining inner peace.

I want to give up soda September. I did this in February because I thought it would be challenging and good for me. I’m doing it now because I want to. I’ve increased my running mileage and am considering running a half marathon in the fall. Adjusting my diet is a natural step in the training and so it will be my next step in my habits journey as well. 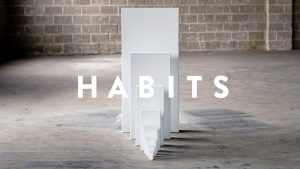 I upped my prayer time by a minute in August and it didn’t feel any differently. I think that’s the key is making changes small—they’re rarely noticeable.

I broke my streak of daily devotions this month. Ninety percent of the time I do my devotions first thing in the morning, but one morning I didn’t do it and my day got away from me and I didn’t pause for quiet time. So I started a new streak. I ended August at 8 days and counting.

I was hit and miss with the core work in August. Though I did it more often than not, it still takes effort and does not feel natural. Maybe it takes longer to feel normal since it isn’t an every day activity. Or maybe it’s hard because I don’t like it. Either way I will keep at it.

I increased my daily writing for at least one ten minute timer (TMT) session to 244 straight days (since January 1). In eight months of writing TMTs I have completed 902 TMTs, which is 9,020 minutes (150 hours) of new writing in 2020.

I have a set of truth declarations I wrote some time back. My goal for September is to read those every morning during my prayer time.

This entry was posted in Habits and tagged giving up soda, habits, new habits, truth declarations. Bookmark the permalink.