Posted on April 8, 2021 by billbushauthor

A couple of weeks ago I had the treat of visiting the seventh grade language arts class in Cottonwood Falls. 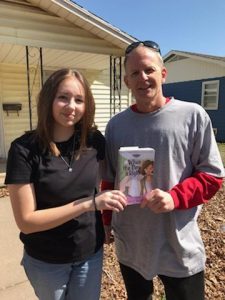 Bill and Kinsey posing with her copy of When the Time is Right.

My cousin’s daughter (I think that makes her my second cousin, but who’s counting?) presented a book report on my cozy mystery, When the Time is Right. Having a book I wrote as the subject of a book report was a first for me, so given the opportunity I gladly agreed to appear in person.

Unfortunately, due COVID-19, I appeared via Zoom instead of in person.

It was a treat for me to watch and listen to Kinsey talk about my book. I enjoyed visiting with the students, though this group was one of the quietest I have come across. Maybe they were awestruck by my celebrity status. 🙂 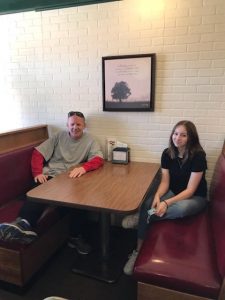 Bill and Kinsey in D’Angelo’s (better known as the Pizza Parlor).

The biggest treat for me happened the weekend before my visit to the classroom. Kinsey came for a visit to Halstead with my Aunt Nyla and Abby (another second cousin, I believe). They wanted to see the actual places that I wrote about in my book.

We started by eating pizza at D’Angelo’s (better known as the Pizza Parlor in When the Time is Right). Nyla took pictures of the inside of the restaurant and I posed with Kinsey in one of the booths.

From there we walked to the hospital and took several pictures and I told them how I envisioned the story playing out as I wrote it. I showed them the house across the street that I used to begin my description of Dr. and Mrs. Emmett’s house. 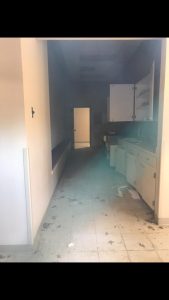 As we circled the hospital, I think Kinsey peeked inside every window she possibly could. She even took a couple of pictures.

My family ran out of time and had to leave, so I didn’t get to take them up on the levee and show them where Eden and Lucas took the critical walk that led them to an understanding that they needed to work together. We’ll save that one for next time.

Maybe one day When the Time is Right will be big enough to supplant Picnic as the go-to reference for what gave Halstead its biggest exposure to the outside world. Or maybe it will be the whole collection of the Halstead Mystery series. Maybe not. 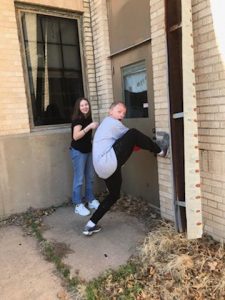 Bill and Kinsey being silly and re-enacting the break-in scene from his book. 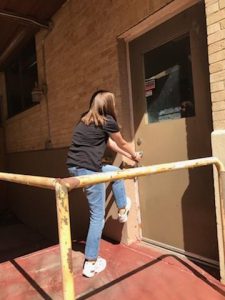 Kinsey pretending to break into the hospital.