My nest is empty so I replenished

Posted on September 28, 2021 by billbushauthor

Honestly, I thought about doing it several months ago but didn’t. Still, it felt like an impulse purchase.

Or more accurately, an impulse adoption.

Yes, the Bush family expanded by two last week. Two was never in my thoughts. That is, until I had to make the decision.

I went to the Caring Hand Humane Society on Thursday, September 16, to learn about the adoption process and to get my questions about adopting and caring for a cat answered. I think I knew in the back of my mind that stepping inside would be the point of no return. I didn’t expect it to happen so quickly.

When I arrived I didn’t know if I would see any cats on this trip, but after visiting with a very helpful lady and asking multiple questions, she offered to take me to the cat room. Immediately an all-black cat named Mushu came up to me and we hung out.

A bit later a gray cat named Figgy and I bonded, and it was over. When I asked about the adoption process, the lady told me if everything looked good with my application I could go home with a cat that day.

I hadn’t even considered that as a possibility. I mean, I didn’t own a litter box or cat toys or cat food. I wasn’t prepared.

But I was hooked.

I filled out the application but couldn’t decide which cat. I could have taken several of them home but had narrowed it down to Ziggy and Mushu because I had bonded with them the most.

I ran to Wal-Mart and purchased the items I needed to bring cats into my home, including a scratching post. I sent my daughter pictures of Ziggy and Mushu and asked her opinion. She texted me back:

Awwww they’re both so cute!!!

The first few days have been interesting.

I thought they were both older than fourteen months (Figgy was born on July 31, 2020) and eight months (Mushu was born on January 23, 2021) when I chose to adopt them.

I only gave them three rules. First, they have to use the litter box. That’s not been a problem as they were well trained.

Second, they need to let me sleep. If I don’t get my sleep I’m miserable and I tend to make people around me miserable as well. They struggled with this one at first. I don’t know what kind of hours they kept in the shelter. Maybe the roomful of cats was like a college dormitory and they partied all hours of the night.

At first, I heard them several times during the night running around the house, or worse, hopping on my bed expecting me to get up with them. But then they started doing better. They spend part of the night in my bed and part of it elsewhere, and when they’re in my bed they do a good job of laying still and not demanding my attention. I’m very pleased with our quick progress.

The only complaint I have is they like to wake me around six. I’m not always clear on which one is the culprit, but I think they’ve both been guilty. They do let me go back to sleep, but it isn’t a habit I want to continue.

It’s the third rule I’m most worried about. It’s an important one. They aren’t allowed to mess up my puzzles. I regularly have a puzzle in process on my kitchen table. 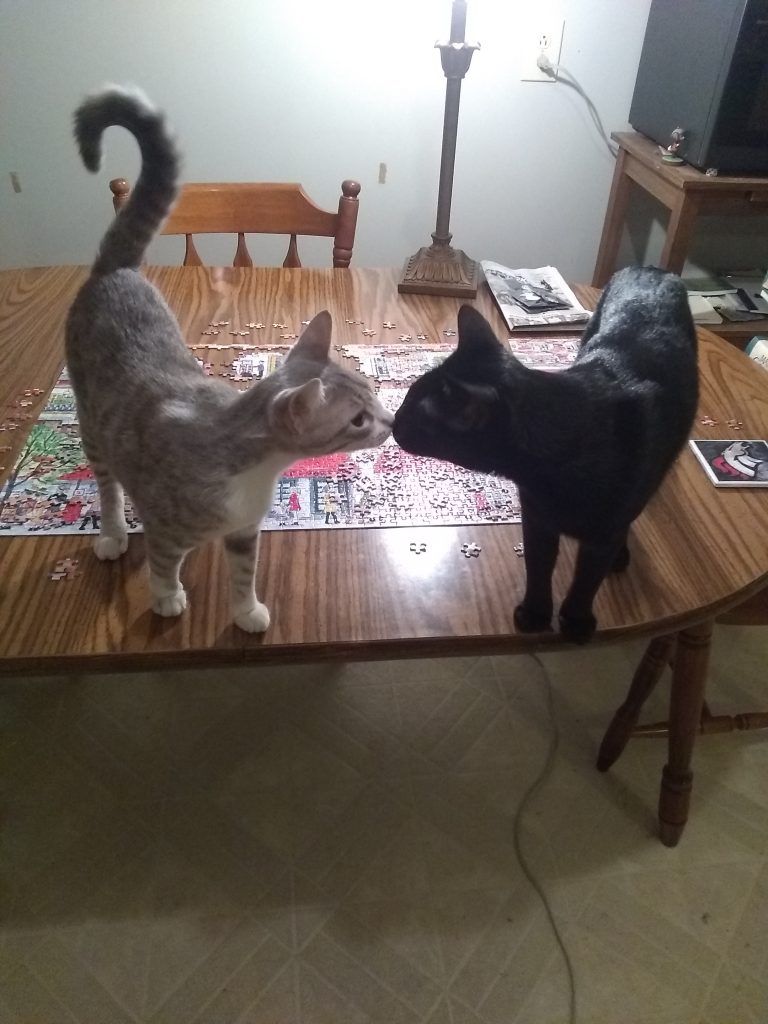 There are signs this will be an issue at some point. They have no problem leaping onto the table, even without the use of the chairs. I didn’t realize how high cats can jump. They both like the table, especially Mushu. I shoo them off but they’re relentless.

I’m about three-quarters of the way through my current puzzle.

I don’t know how but so far they haven’t messed with the puzzle or the pieces. They walk across the table and don’t drag puzzles pieces everywhere. I can’t see that continuing, especially when I start the next puzzle and have a thousand pieces spread out across the table. I may need to build a barrier.

Update: I purchase a spray bottle and now both cats seem content not to be on the table or my kitchen counters.

One rule I didn’t need to make was to stay off of the toilet while in use. Figgy made that mistake once and now seems content to let me pee in peace.

I’m not an impulse shopper, but I’m glad I made an exception for Figgy and Mushu. They are a welcome addition to life in my house that today seems a little less lonely.